This post will be about a couple of small towns from Oregon. I will do more posts about small towns in the future. I’ll start with Drain, Oregon. Drain is a city in Douglas County. It’s zip code is 97435. It was named after the founder, Charles J. Drain. It has a very low population, with only 1,151 people. That’s less than the West Linn High School population. In 1876, a road was built between Drain and Scottsburg. The Drain Normal School was founded in 1883 by the Methodist Church. The state took it over in 1885 and renamed it Central Oregon State Normal School. Drain’s total area is 0.61 square miles, according to the United States Census Bureau. In 2010, there were 454 houses and 319 families living there. 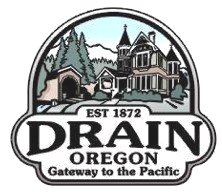 I hope you enjoyed learning about Drain, Oregon. Next up: Idiotville.

Idiotville is a ghost town on the border of Washington County and Tillamook County. There’s nothing at the site, so don’t try looking for it on Google Maps. The stream nearby was named Idiot Creek.  A half mile up Idiot Creek there is a logging camp called Ryan’s Camp. Idiotville got it’s name because it’s so remote that it was said that only an idiot would work at the logging camp, and the name stuck. 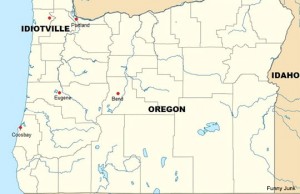 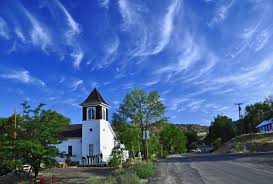 Spray is a small town in Wheeler County. It was named after the first postmaster John Spray. In 1900 he created a ferry to cross the John Day River, and he also helped create a school and store. Spray only has 160 people! After Wheeler County was established in 1899, Spray was considered as a possible county seat. An election was held in 1900. The final score came at 436 votes for Fossil, 267 for Twickenham, and 82 for Spray. John Butler was the first mayor. The total area of Spray is 0.29 square miles. The average climate is 33˚ in January and 72 in July. It once went up to 116˚ degrees! Do you know anyone who lives in a small town?