IF YOU ARE WATCHING THE MOVIE HIDDEN FIGURES SOON DO NOT READ!!!!!!!

Have you watched the movie Hidden Figures? I recently watched it at the historic Moreland Theater in Portland. It follows the lives of 3 African-American math geniuses, nicknamed “computers,” whose calculations were crucial in sending John Glenn into space, Neil Armstrong on the moon, and many more advances in space exploration. They worked for NASA in a time when women, especially African-American women, did not have the same opportunities as men. Their names were Katherine G. Johnson, Dorothy Vaughan and Mary Jackson. Katherine Johnson received the Presidential Medal of Freedom on November 24, 2015. The movie is a true story. Katherine, Dorothy, and Mary and their colleagues were in danger of losing their jobs due to an IBM mainframe that is gigantic. Remember, this took place in the 60’s. I was impressed by how smart and determined the women were. John Glenn was very kind to Katherine. He even asked for her to check the numbers for his landing. 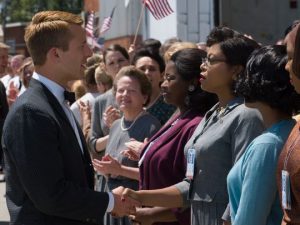 John Glenn shakes Katherine Johnson’s hand, with Dorothy on her right and Mary on her left.