Astronomers studying the sky from a telescope in Chile found a weird pattern. While watching a star, dark dots came into view, almost like an eclipse. Indeed, these were planets that all could have life. What’s more, 3 of those planets are in what is called the Goldilocks Zone, which is the perfect distance from the star to have water on it. This water could support life. The star is called TRAPPIST-1. The planets are only known by letters, b through h.The star is a dwarf star that is 40 light-years away. Their orbits are closer to the star than Mercury is to our sun. Each one takes between 1.5 days and a few weeks. We might not be alone in this universe. Do you think we are? 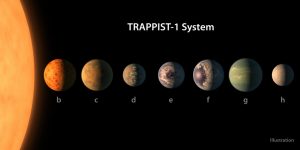 A brand-new species of dinosaur was unveiled in Mexico. Yehuecauhceratops mudei is also known as “ancient horned face.” It’s horn is what distinguished it from other species. It is about 10 feet long, or 3.048 meters. Its cousin is a triceratops, which is very well known. “We know that there are not just dinosaurs in North America that are here,” says Hector Rivera, the Head of Paleontology at the Coahulia Desert Museum.” But there are dinosaurs that are Mexican and we will discover them.” What is your favorite dinosaur? 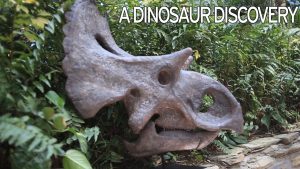