On Baylor Street, between 9th and 10th Avenue, there are some unfinished condos. At least, that’s what it was in the 80’s. Now, it is the largest graffiti park in Austin. It has been named many things, the most common one being Castle Hills, but you can call it The HOPE Outdoor Gallery, Austin Graffiti Park, or Baylor Street Art Wall. This three-story outdoor art wall started out as a place artists would sneak away to visit so that they could graffiti the walls. The owners of the property, strangely, did not object to it, but saw it as an opportunity to “Keep Austin Weird.” The name Castle Hill was because of the castle found right above it. In 2011, it was officially named The Hope Outdoor Gallery. You need a permit to paint on the walls, though, so you can’t take a can and start spraying. Email murals@hopecampaign.org to get one. 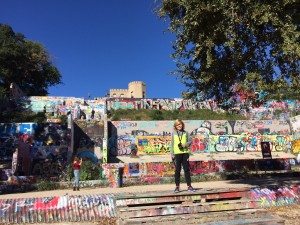 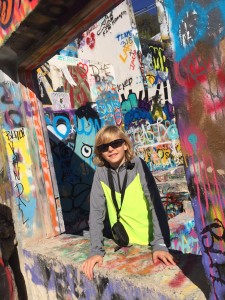 Welcome to Austin, Portland, Oregon’s sister city and holding the same nickname of “Keep Austin Weird.” Also, it is the home of the largest state capitol building. The only capitol building that is larger than it in gross square footage is the United States Capitol in Washington D.C. The capitol building is, however, the tallest capitol building in the United States. The material that was used for the building was “Sunset Red” granite from a mere 50 miles away. The minor details were important, too. Each exquisitely carved wooden door was hung with custom hinges. In fact, because it is such an amazing building, there are laws prohibiting the obstruction of the building. If you ever visit, make sure you don’t whisper in the rotunda (or, if it’s something good, feel free to). It’s a whispering gallery! I had a lot of fun at the state capitol and I hope you visit. 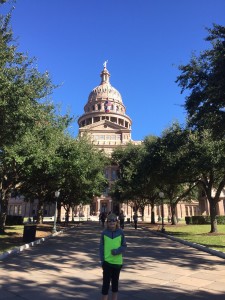 Welcome to Austin, home of the Longhorns and the largest state capital. (Austin/San Antonio is where I decided to take my annual trip with my mom) This is also where Austin City Limits, or ACL, is held. ACL is a music television show that is watched weekly on PBS. ACL is the longest-running music program in television history, the only television show to have been awarded the Presidential Medal of the Arts, and is, according to Time magazine, one of the 10 most influential music programs of all time. It’s hosted everyone from Willie Nelson to BB King to Foo Fighters. It has also been admitted into the Rock and Roll Hall of Fame and Museum. The show’s pilot was shot on October 14, 1974. It starred Willie Nelson, the famous country music artist. ACL helped Austin get the title as “Live Music Capital of the World.” In fact, I also got to go to some live music at Antone’s, a blues nightclub. It began in 1975. Click on the link below.

Hi there. Welcome to my blog after my summer hiatus. My summer was filled with travel, camps, family, friends, and great books.   I learned a few magic tricks as well.  Now back to school.  I’m excited about my new class and teacher.  Looking forward to a fantastic year!

This year on the blog I will continue to chronicle my travels and blog about interesting places as well as current events.  If you have suggestions for topics, please let me know.

What have you done this summer? 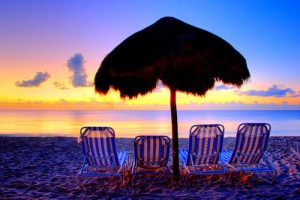 My next post will be about the museums, the Louvre and the Musée d’Orsay.

Did you know that The Louvre is the largest museum in the world?  It is so large that it would take you 100 days to see all the paintings, and even then you would get only 30 seconds at each piece. That means there are 380,000 paintings in the Louvre, though not all are on display. The Louvre was not originally a museum. It was a fortress built in 1190. Under Napoleon’s reign, the 652,300 square foot museum was renamed to Musée Napoleon. He extended the Louvre’s collection of art by 5,000 pieces before he was defeated. The Mona Lisa, arguably the most famous painting in the world, is housed at the Louvre. It even has bodyguards! The Mona Lisa is not as big as most people think; it’s just 77 centimeters by 53 centimeters. (30×21 in) 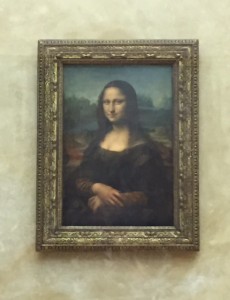 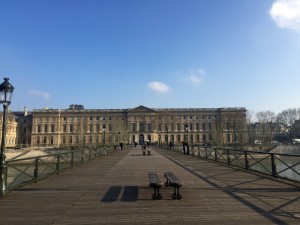 Now for the Musée d’Orsay. The Orsay averaged 3,331,403.6 visitors from 2010-2014. There are 10 escalators and 12 elevators. There are 35,000 square metres of glass and 13.2277 tons of metallic structures. Some of the most famous Impressionist artist’s paintings, such as Van Gogh’s self-portrait are displayed there. Some other paintings at the d’ Orsay are Charing Cross Bridge by André Derain, Starry Night Over the Rhone by Vincent van Gogh, and The Snake Charmer by Henri Rousseau. 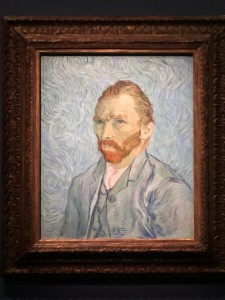 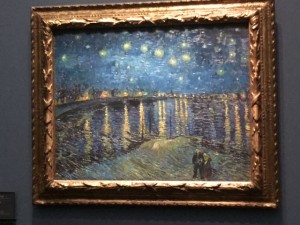 Starry Night Over The Rhone by Van Gogh

Who’s your favorite artist? Have you been to any of the Parisian museums?

The Arc de Triomphe is a very famous landmark of Paris. It was unveiled in 1836, 30 years after Napoleon I requested it. The Arc was purposed as a monument to honor the heroes of war. It could have been a giant elephant. Charles Ribart proposed a three-level, elephant-shaped building that would be entered by climbing up a spiral staircase that lead into the elephants stomach. 12 streets go into the intersection under the Arc, causing (on average) one crash every 20 minutes. One of the most famous streets in the world goes through the Arc:  Avenue des Champs-Élysées(middle picture). At the base of the Arc de Triomphe there is a torch.  Every evening at 6:30 P.M. it is rekindled, and veterans lay wreaths colored with red, white and blue near its flame.   It burns in the darkness sacrifice of an unknown French soldier who lost his life during World War I. On November 12, 1919, it was determined that the Unknown Soldier would be laid to rest at the Pantheon.  The legislation authorizing the memorial stated:

ARTICLE 1:  The honors of the Pantheon will be rendered to the remains of one of the unknown soldiers who fell on the field of honor during the 1914-1918 war. The transfer of the remains will be solemnly made on 11 November 1920.

ARTICLE 2 (On the same day):  The remains of the Unknown Soldier will be buried under the Arc de Triomphe.

What is your favorite design on the Arc de Triomphe? 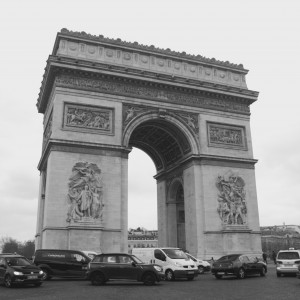 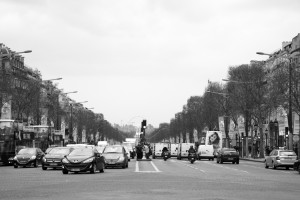 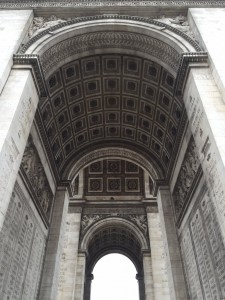 The inside of the Arc

Charles Godefroy flies through the Arc↑ 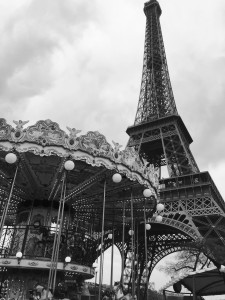 The carousel next to the Eiffel Tower 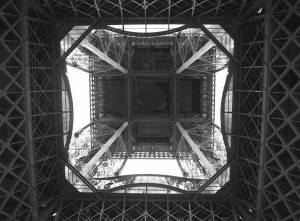 Under the Eiffel Tower

According to my research book (from the cathedral), “the visitor cannot fail to admire the masterpieces of Jean de Chellesand and Pierre de Montreuil, the designers of two great circular stained-glass windows that light up the transept.” Guess what those stained-glass windows are called? The Rose Windows! The north and south one both measure 13 meters (42.6509 feet) in diameter and are placed on clearways that are 7 meters (22.9659 feet)tall. The south rose window, a gift from King St. Louis, comprises 84 compartments, all dedicated to the New Testament. Built around 1250, the north rose window has the most original stained glass. 80 medallions set out in three circles represent people from the Old Testament who are surrounding the Virgin and the Infant Jesus. At the middle of the cathedral’s façade is the west rose window. The west rose window is the oldest out of all three windows. It is made out of three circles around a central medallion and is only 10 meters in diameter (32.8084). It has undergone many restorations. 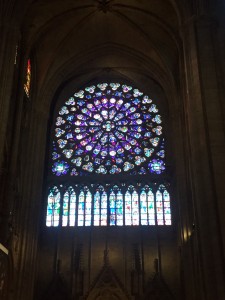 The Notre Dame Cathedral is 41 meters wide (134.514 feet) and 63 meters high (206.693 feet). The North Tower was finished in 1240 and the South in 1250. The South Tower contains the 13-ton bell, named Emmanuel. Emmanuel, according to musicologists, bell ringers, and musicians, is one of the most remarkable sound vessels in Europe. It makes the sky vibrate during religious feasts and also during national events. There are also many organs at the Notre Dame. The Great Organ, built in 1330, is a 6-foot montre with a single keyboard with 4 to 6 pipes per note. Then, in 1401, a new organ was built in the stone organ loft above the large west portal. 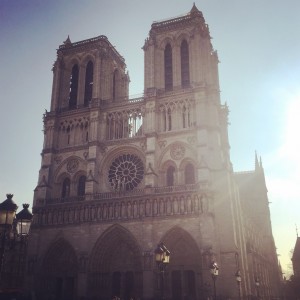 What is your favorite part about the Notre dame? 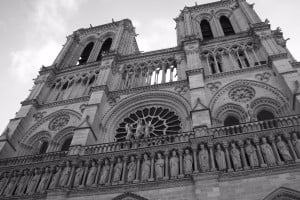 Bonjour! Mon prochain post sera sur Paris. Paris is the capital of France. It is a very famous city, with a population of  2,241,346(2014). It is the “City of Light.” The most famous landmarks there are the Eiffel Tower, the Arc de Triomphe, and the Notre Dame Cathedral. It is situated on the Seine River in northern France.  Paris is known for its delicious food, including croissants, crepes, artisanal cheeses, and fine wine. Paris is home to beautiful buildings with interesting architecture. I will be doing posts about some of the following topics: the Eiffel Tower, the Arc de Triomphe, PSG, the Notre Dame Cathedral, and the museums, the Louvre and the Musée d’Orsay. Post on the Padlet below.

I have to interrupt this series to bring some important news from Europe, or to be precise, England. Leicester City has won the Premier League title! Claudio Ranieri, the Italian manager who led Leicester to the title, has been nicknamed “non ci soon titoli”, meaning “No Titles”. Now, here he is winning The Greatest Show on Earth. Leicester started the season with 5000-1 odds to win. For some perspective, the Cleveland Browns have 200-1 odds to win the 2017 Super Bowl. Leicester’s squad was created for £57m, much less than any team in the top half.  Leicester is owned by Thai billionaire Vichai Srivaddhanaprabha, who already spoke of his readiness to spend £180m to secure the Foxes a top-five finish in the Premier League. Amazingly, this year they actually won the title. Their most promising players this season have been Jamie Vardy, Riyad Mahrez, N’Golo Kante, and Kasper Schmeichel. Kasper is the son of a legendary goalkeeper named Peter Schmeichel, who won IFFHS World’s Best Goalkeeper in 1992 and 1993. Jamie Vardy used to be in the lower leagues with a number of different clubs and now he is a known as one of the best 23 players from England. Who do you predict will win the title next season?