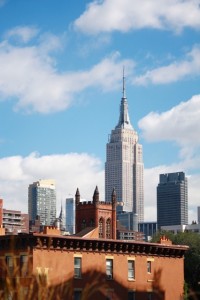 The Empire State Building from the High Line

We went to the Empire State Building, which is on 5th Avenue.  It is an Art Deco style buidling that opened on April 11, 1939.  It only took 410 days to complete. It is 102 stories high.  It was the tallest building in the world for nearly 40 years.  On a clear day you can see 80 miles.  We rode the elevator up to the 86th floor Observation Deck.   I thought it was really fun and had amazing views.  It was cool to see how big Central Park was from that height. We also had a great view of the Chrysler Building.  At night it looks so cool! There is a light show every night, the  lights come on at dusk and go off at 2:00am.  In 2012, a new lighting system was installed with LED fixtures.  So instead of only 9 colors, there are 16 million colors to choose from. My favorite color combination was orange & blue. I could see the Empire State Building from my room. Unfortunately, I didn’t get to see the lights turn off.

Have you ever been that high up in a building? 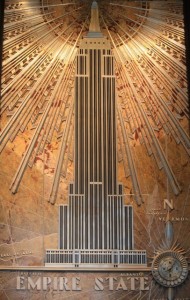 The lobby of the Empire State 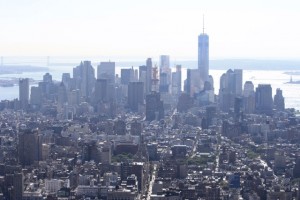 The view of lower Manhattan from the observation deck.

The following video shows a light show for Halloween. You’ll also be able to spot the Chrysler Building, the bright lights of Times Square, The MetLife Building, Madison Square Garden, The Freedom Tower, and multiple bridges.