Oktoberfest is, as the name suggests, a festival held every fall in Munich. It is not a Bier(beer) festival, as most people think. It is actually a party celebrating the anniversary of Bavarian Crown Prince Ludwig and his wife, Princess Therese of Saxony-Hildburghausen. It is the world’s largest funfest. Below are some of the foods that there are at Oktoberfest: 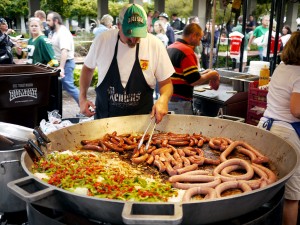 The 6 million people that come there annually consume 1.5 million gallons of beer, 200,000 pairs of pork sausages, and 480,000 spit-roasted chickens during the 16-day party. I got the Schweinebraten recipe below from whats4eats.com:

Oktoberfest has many tents. There are some orchestra tents, the Hippodrom tent, and many more. Have any of you heard of the costume and riflemen parade of Oktoberfest? It is in honor of the silver wedding anniversary of King Ludwig I and Princess Therese. It took place in 1885 for the first time. Maximilian Schmidt started another one in 1895 with 1,400 participants in 150 costume groups. Since 1950, this has grown to be one of the largest parades of its kind. On the first festival Sunday, 8000 participants march in the parade in their historical costumes seven kilometers to the grounds. For Oktoberfest, the traditional dress for women is the dirndl. The men wear something called a lederhosen. 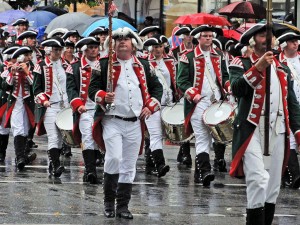 Has anyone ever been to the Munich Oktoberfest, or any near you?