The Allianz Arena is where 1860 München and FC Bayern play. The 75,000 capacity stadium has witnessed 50 UEFA Champions League matches, 6 World Cup games, and who knows how many league games. It was built in 2005. Every year, the arena brings in 4 million visitors from all over the world. Those people have drunk 8 million liters of drinks and consumed more than 6 million grilled sausages. Phillip Lahm has had the most apperances there, with 205 times. Yet he still hasn’t scored the most goals there. The most prolific striker is Mario Gomez, with 68 goals put into the back of the net. The fastest goal scored there was 10 seconds in to a Champions League match by Roy Makaay. 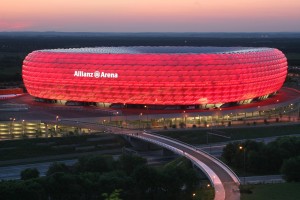 The innovative stadium lights up for special occasions and for the team’s games. Phillips was the company that made the LED lights for the stadium. There were new lights installed in 2011-12. It can create 16 million colors. The new façade uses 60 percent less electricity than the one before 2011. My favorite combination was the yellow that the stadium was made when a Dortmund fan hacked in and made it yellow. 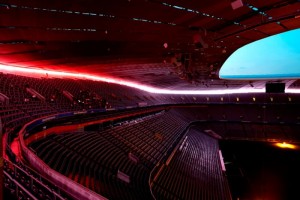