The reason I chose Munich and Paris is that my mom recently was there and I was interested in learning more about them. Marienplatz, named after Mariensäule, is the town center of Munich. It has been Munich’s main center since 1158. It survived World War I and II. It is 85 meters tall. It’s is also known as the New Town Hall or Neues Rathaus. Mary’s Column is a Marien column right next to the town hall. It was erected in 1638. It was made to celebrate the end of Swedish occupation during the Thirty Year’s War. Now, back to Marienplatz. Today, the Marienplatz is dominated  by Neues Rathaus, which is one of Germany’s most distinctive buildings.  There is a famous Glockenspiel at the top of the building with 40 bells that chime at 11:00am, 12:00pm, and 5:00pm.  Marienplatz is also home to many beautiful churches and markets.  Auf  Wiedersehen!

What is your favorite characteristic of Neues Rathaus? 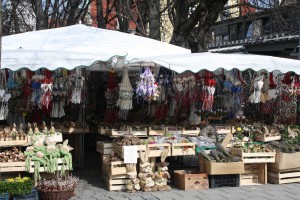