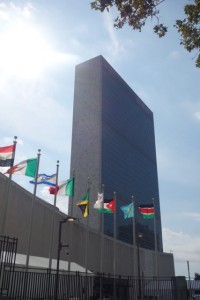 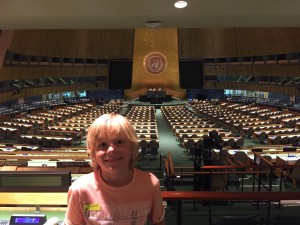 The UN was founded on October 24, 1945 in New York City. The UN sits on 16 acres on the East River waterfront near midtown Manhattan.  The land for the UN was donated by John D. Rockfeller. Even though the building is in New York City, the land is international territory.   The UN is 70 years old.  The UN was created after WWII to have countries work together to avoid future world wars. There are 193 Member States of the UN.  The 5 permanent members of the Security Council are the United States, Russia, France, United Kingdom, and China.  There are a total of 15 members on the Security Council and the 10 other members are elected for two year terms.  The Security Council is responsible for International Peace & Security.  They determine when UN Peacekeeping operations are needed.

The Economic and Social Council has 54 Member States.  How many of you have played the “Freerice” trivia program?  It is a non-profit website that is owned by the UN.  Proceeds suppport the United Nations World Food Programme.  I asked our tour guide where the money from Freerice went.  She said that all of the money since 2010 has gone to Cambodia for school lunches for children and also money for poor women.  If you have a chance, please go to the site.  It is a fun way of learning and you’ll be helping the world.

On the tour I was able to see many gifts that countries have donated to the UN.  I also learned a lot about the Peacekeeping missions that are ongoing.   The UN has been awarded the Nobel Peace Prize 11 times.

What are some other functions you think the UN does? 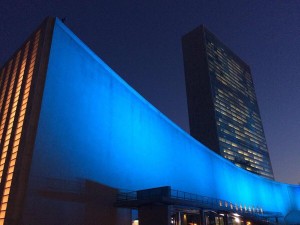 The UN lit in blue for UN day 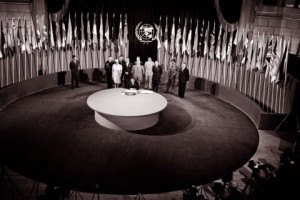 Many iconic landmarks and other sites were lit up today in blue to honor the United Nations.  The UN has a great website and you can find interesting information.